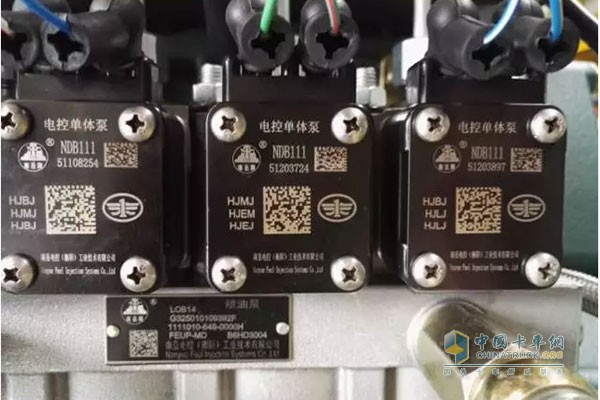 QR code on the injector

According to this compensation code, the ECU gives an offset signal to the injector working under different conditions to improve the correction accuracy of the injector under various operating conditions. The QR code contains correction data from the injector, which is written to the engine controller. The QR code causes the number of fuel injection quantity correction points to increase greatly, thereby greatly improving the accuracy of the injection quantity. The essence is to use software methods to correct errors in hardware manufacturing. The machining error in machine manufacturing is inevitable, leading to errors in the injection volume at each operating point of the finished fuel injector. If the error is corrected by machining, it will inevitably cause an increase in cost and decrease in output.

QR code technology is to use the inherent natural advantages of Euro III electronic control technology. It uses QR code to write into ECU to correct the injection pulse width of each working point of the injector, and finally achieves the same fuel injection parameters of the engine. Ensure the consistency of the engine's cylinder work, and reduce emissions.

What are the benefits of generating a QR compensation code from a device?

It is well known that maintenance of injectors consists of two systems.

Second: adjust the length of time the injector is energized.

The compensation of the QR compensation code to the injector is accomplished by changing the length of the electrical signal. Unlike our adjustment of the internal gasket, for some injectors that are acceptable but not very accurate, we can generate a new QR. Compensation code to fine-tune the fuel injector injection, so that each cylinder injection more balanced. For some spray inconsistencies, will inevitably lead to engine power shortage, or black smoke, fuel consumption increases and the engine local heavy heat load caused by piston top burning and other failures. Therefore, in the maintenance process of the Euro III electronically controlled diesel engine, the correction of the QR code must be faced. When replacing a new injector, you must use a professional device to write the QR code. If a repaired injector is used, there is no significant deviation from the standard value of the original QR code pre-injection, idle speed, medium speed, or high speed, so there is no need to replace anything as long as new compensation is produced with specialized equipment. Code, through the decoder input ECU can solve the previous car smoking and knocking and other issues.

This is an inaccurate view. The single-fuel injection base of the low-power engine is relatively small, and the QR code correction has a considerable proportion in the base of each injection, so if the engine is not corrected, the abnormal performance is more serious, prompting maintenance personnel and vehicle owners to face this problem. . Because the base of large-displacement engine fuel injection is relatively large, relatively speaking, the correction amount of the QR code is not very large. When replacing a repaired injector or replacing a new injector, even if the QR code is not written from the use of maintenance From the point of view, it does not seem to make a difference. However, without correcting the QR code, although a single fuel injection error seems to be irrelevant, the engine operating time is calculated in thousands of hours or even tens of thousands of hours. Each fuel injection error is a very impressive figure. Because the actual fuel injection of the fuel injectors of each cylinder fails, high-precision detection equipment must be used to generate accurate QR codes and write them into the ECU. After the engine works for a period of time, due to the flushing of high-pressure diesel oil, the injection hole becomes larger, the valve assembly wears out, the actual fuel injection parameter changes, even if the return oil is not large, the engine power is acceptable, and it is better to regularly generate a check on the special equipment. The new QR code, written in the ECU, achieves the best state of engine operation, ensuring the economical operation of the engine and reducing emissions.